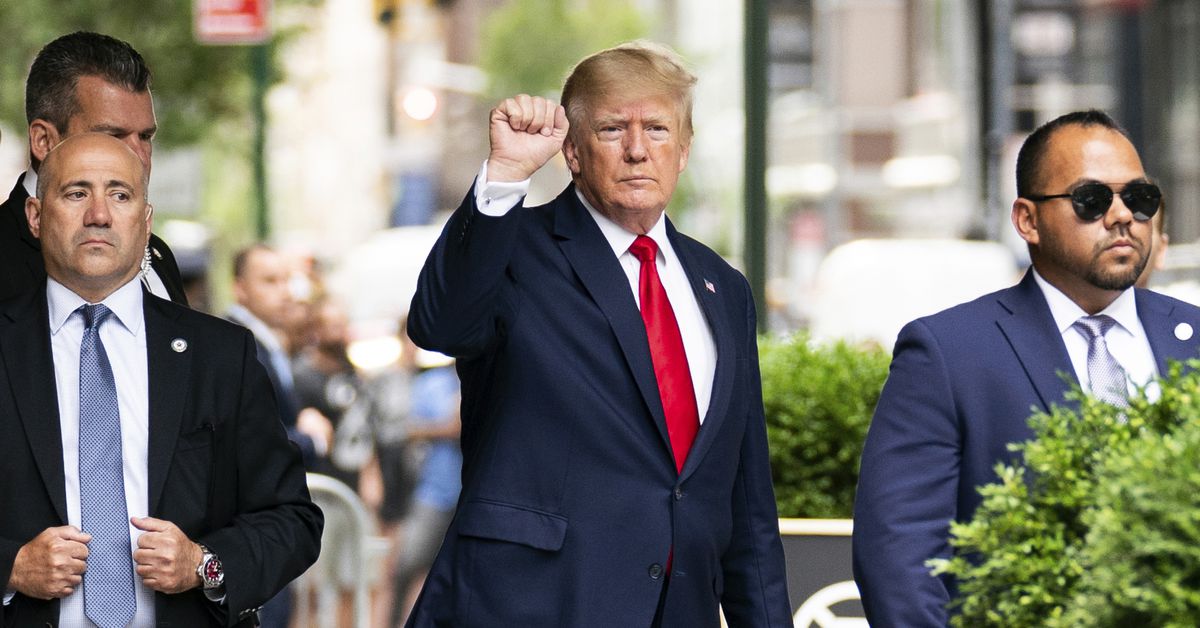 The Washington Post reported Thursday that “classified documents relating to nuclear weapons” were among the things FBI agents were looking for when they searched Mar-a-Lago this week. And there were numerous examples of “secret,” “confidential,” and “top secret” documents listed on the official property receipt from the seizure that was released Friday.

A warrant released alongside the receipt suggested the FBI may be looking into violations of the Espionage Act and potential obstruction of justice as well.

Former President Donald Trump has denied taking any nuclear-related documents, calling the Post’s reporting a “Hoax.” Trump has been known to issue false and misleading statements before, of course, which raises the question: If Trump had nuclear secrets lying around his house, what might they be?

“It could be anything ranging from something that would endanger the lives of hundreds of millions of people to something that has no impact on anything whatsoever. That’s how vague the classified categorization is,” Alex Wellerstein, a historian of science and nuclear weapons, told me.

I reached out to Wellerstein after the Post report, and after the New York Times reported that federal investigators were concerned about information from “special access programs” — what the Times called “extremely sensitive” US operations abroad, or sensitive technology or capabilities — falling into the wrong hands if it was being stored at Mar–a-Lago. In his research, Wellerstein has focused extensively on the history of nuclear weapons, presidential power over them, and how nuclear secrets are safeguarded.

I asked Wellerstein to offer some ways to think about all this news, and whether Trump could be in legal trouble. Our conversation, below, has been edited for clarity.

How should we understand what’s going on here?

There’s two frameworks that I keep coming back to. One, is there a national security risk to how these documents were handled or stored? [Was there any] breaking the law or breaking regulations?

Separate from the question of whether Trump could be prosecuted — that’s a harder question to answer in some ways, because the president can declassify certain categories of things, sort of by fiat — is there a risk in keeping these kinds of documents at Mar-a-Lago?

Mar-a-Lago is potentially not set up to handle these kinds of documents according to the regulations. If you have a top secret document, that implies, through these regulations, how you can handle this document, what kind of safe it can be in, who is allowed to be guarding the safe, what they have to be armed with. All of that kind of stuff.

Then there’s the perhaps more significant legal angle which is, what are the responsibilities of the White House with the preservation and disposition of records, which is a totally separate issue. It’s pretty clear you’re not allowed to take records home and keep them and not give them to the National Archives and not give them to your successors. There are pretty tight regulations around what you are allowed to do with these kinds of records.

Does that legal framework apply to nuclear secrets?

Nuclear is tricky, because nuclear secrets are handled by a different law [the Atomic Energy Act] than the rest of [government] secrets, and the president’s ability to sort of arbitrarily declassify things in a nuclear realm is not as obvious. The law constricts nuclear secrets very differently than it constricts most national security information. It’s hard to know whether it could either be something incredibly banal and not interesting, or something that would have massive implications for American security and diplomacy. And so it’s the entire gamut of extremes.

Now, to get back to the original question — could POTUS remove things from the RD category unilaterally (and without telling anyone ahead of time)? The Atomic Energy Act certainly makes zero provisions for this. It is pretty clear on the procedures and agencies involved. pic.twitter.com/WO0bZD4Bld

What about the term “special access program”? Does that suggest something significant?

Usually when you have something like a special access program, what you’re essentially saying is, we have lots of secrets that we think, if they got released, would do damage to the United States.

In principle, that’s the baseline. And then as you go up the ranks of secrecy, like confidential, secret, and top secret, you’re essentially saying, the damage would be more and more. And it goes from saying, for example, “Well, this could make our relationship with Japan a little more difficult” — that’s the form of damage — to the top level, which is, “We could have entire intelligence sources compromised, people could die, our plans could be rendered nil, they could attack us first and we lose hundreds of millions”: just as imaginative as you can get.

So “special access program” is just another one of these layers, where you’re essentially saying, “Look, we really think this is important stuff. And so the number of people who can have access to it needs to be smaller, and those people have to be specially vetted.” This is the kind of stuff that would potentially have some sort of nasty implication in the very short term, but that could be very vague.

Whether that’s true or not [about the material the Times reported was in Mar-a-Lago] — people have misused these things, and overapplied them, and used them for things that are just embarrassing — who knows? Without more information, it’s hard to even speculate, but if it’s got stuff like that in there, that means that somebody, when making that document, thought, this is hot stuff. So you know, handle with care.

This is an anecdote, but somebody who used to work at Los Alamos [National Laboratory] told me a little while ago that they would occasionally mix in certain amounts of higher level classification into a document because it would allow them to just easily classify the document at a certain level and not have to worry about segregating out certain types of information, and just doing this; essentially, a bureaucratic hack to make their jobs easier. Which I found a horror, but he told us as a funny joke.

And I was like, well, that’s horrifying, right? You’re admitting that you have gamed the system in a way that overclassifies because it’s easier to handle, in some ways, higher classified things; they come with more responsibilities, and they come with more regulations, but if you’re already in a world that’s highly used to using these things, you know that fewer people are going to look at your program and get in your way. I’m not saying that’s a universal example, but it’s hard to know what is “legitimate.” And it’s also hard, inherently, to even have a definition of legitimate that we would all agree on.

Another good example: is this the true worst-case scenario for nuclear documents? What if … one of these nuclear documents confirms that the United States knows, as we know it does, that Israel has nuclear weapons?

Another good example, and this is what some people have speculated among the worst-case scenarios: because the United States doesn’t acknowledge [Israel’s nuclear weapons], there’s that legal fiction. So a document from the US that acknowledged it would destroy the legal fiction if it was released or brought out. It could create problems for another country, too. Maybe they get to enjoy the fiction for their domestic politics. And suddenly they’ve got to confront that domestically. Right? It can’t be ignored.

But I’ve never gotten any sense that Donald Trump has done anything like that. Every time he’s released classified information, which he has done many times — there’s that famous picture he tweeted of the bombing of that Iranian site, which was really tricky, because it revealed information about what we can see in our satellites, which is very classified, like what resolution they can go to — I’ve never seen a deliberate, “People need to know this” situation. That seemed like an “oh, cool” situation.

I saw you’ve spoken about Harry Truman — how as president, nuclear weapons were used largely without his involvement, and how he revealed some nuclear secrets post-presidency. Is this at all like that?

It’s just a very odd situation. It’s not something that happens normally. There have certainly been cases in which former officials of different sorts have talked about things that either they thought were unclassified, or they just hadn’t given any thought to its classification.

Truman had a number of issues with saying, especially after his presidency, stuff that annoyed current administrations or made them feel like he was getting into territory he really shouldn’t get into. And this is just one example of that, but the one I posted [is] the document about [Truman talking about how much plutonium was in the first atomic bomb]. And for Truman, you can kind of give him a little slack since this literally got invented under his watch.

In 1956, the FBI was told by someone — probably someone at the AEC — that Harry Truman was telling people how much plutonium was in the first atomic bomb. pic.twitter.com/w4WDNGCHV8

The closest that I can think of now is Jimmy Carter, who has said some things that seem to be very clearly implying that Israel had nuclear weapons. And that’s not what he’s supposed to say. Again, that’s a very open secret. But that’s the only other example that comes to mind.

They don’t prosecute most people who violate security, and even with nuclear things, prosecution is a really high bar. And the laws for prosecuting are not that ironclad in terms of their constitutionality. So if … they don’t think you’re a spy, what they usually do is an administrative sanction, where you might lose your clearance and then have to apply to get it renewed and it’s a big, ugly sort of thing, but it’s not like going to jail for taking documents home with you. It’s not common.

The government did, in the 1940s, have some issues with GIs who had stolen photographs that they weren’t supposed to have and then tried to sell them. I know there’s been speculation that one of the reasons Trump may have these documents is to sort of give them away or sell them, not as espionage, but as mementos. So that’s not totally unprecedented, and they did prosecute some people for that. But again, these were GIs … I don’t think the odds of prosecution for mishandling of secrets are super high, just because it’s so legally difficult anyway, but if it’s a president, it’s even more legally difficult and legally unclear, and they do have discretion over whether they prosecute these kinds of things.

But I do think it’s pretty significant that this clearly violates the Presidential Records Act. There’s [not] a lot of interpretation there, whereas with the nuclear stuff, or the Espionage Act, you have a lot of interpretation about what the president actually can do. But the Presidential Records Act is pretty straightforward.