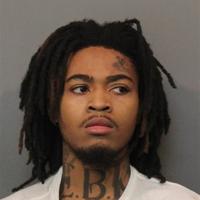 CROWN POINT — Charges filed Tuesday against two men and a teenager allege they carjacked a man at gunpoint Sunday at a Schererville gas station and led police on a chase that ended with a crash in Hammond.

One of the defendants, Eddie M. Bass, 23, of Phoenix, Illinois, also is accused of attempting to drown a police K-9 after he and the dog fell into a pond during a struggle near the Cabela’s store in Hammond.

White was taken to Advocate Christ Medical Center in Oak Lawn after his arrest Sunday because of facial injuries he suffered in the crash on Cabela’s Drive, Schererville police Cmdr. Jeff Cook said.

Beasley and White were in custody, police said. Initial hearings had not yet been scheduled for them as of Tuesday afternoon, Lake Criminal Court records showed.

Charges were still pending against two other people believed to be involved in the alleged carjacking, police said.

Schererville police were dispatched about 11 p.m. Sunday to a gas station in the 2100 block of U.S. 41, where they spoke to a man who had been robbed of a Dodge Charger by at least two males with a gun, Cook said.