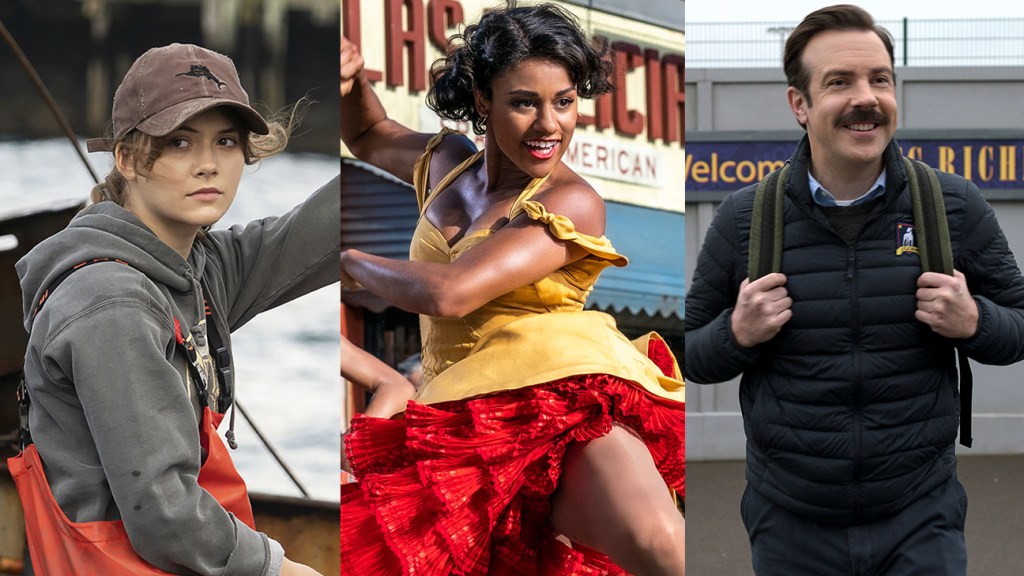 CODA, West Side Story and Ted Lasso scored early wins at the 2022 SAG Awards on Sunday night, with CODA‘s Troy Kotsur making history when he became the first deaf actor to win a SAG Award when he scored the best supporting actor trophy.

Using a sign-language interpreter, he explained that he has been a SAG member since 2007 and that he now feels “like I’m finally part of the family.” He also talked about sleeping in his car and in his dressing room backstage when he first started out, only to round out his speech by professing his love to his wife and joking that his daughter will not be allowed to use the trophy as a jewelry stand.

Ariana DeBose won the award for best supporting actress for West Side Story, telling the audience that it’s “taken a long time to call myself an actor,” noting her roots come from dancing and Broadway.

Romy and Michele’s High School Reunion stars Lisa Kudrow and Mira Sorvino reunited on stage to present the award for cast ensembles, not before they walked onto the stage to “Time After Time,” a nod back to the 1997 film. Ted Lasso won the award in the comedy series category. Hannah Waddingham and other members of the cast accepted the award remotely via video, shouting out Juno Temple who was seated in the audience in Santa Monica.

Ted Lasso had already scored a previous win on the TV side when Jason Sudeikis won best leading actor in a comedy series, mirroring his win from the Emmys in September.

Jean Smart won the outstanding performance by a female actor in a comedy series for Hacks, which marks her first win at the SAG Awards, and also mirrors her win from September’s Emmy Awards. During her speech, she joked that acting was the oldest profession of mankind before asking the world to beg for peace in light of the Russian invasion in the Ukraine.

Lee Jung-jae won best actor in a drama series for his role in Netflix’s Squid Game. Speaking through a translator, he couldn’t believe his win. “I did write something but I don’t think I’ll get to reading it,” he said, putting away his notecards. He thanked the fans around the world and the Squid Game team, who were cheering him on in the audience.

Daveed Diggs, Lin-Manuel Miranda and Leslie Odom Jr., all of whom were part of the original Broadway cast of Hamilton, opened the ceremony that took place at the Barker Hanger in Santa Monica, California.

“Together again finally we return to a world where all we have to do to hang out like this is get dressed up, show up, get swabbed, sanitized, screen, mask, vaccinated, boosted, rapid tested and PCR cleared in 48 hours, now who’s ready to party?” Odom Jr. said.

Before the show began, No Time to Die won the award for outstanding action performance by a stunt ensemble in a motion picture, while Squid Game won for TV series.

The full list of 2022 SAG Award winners can be found here.