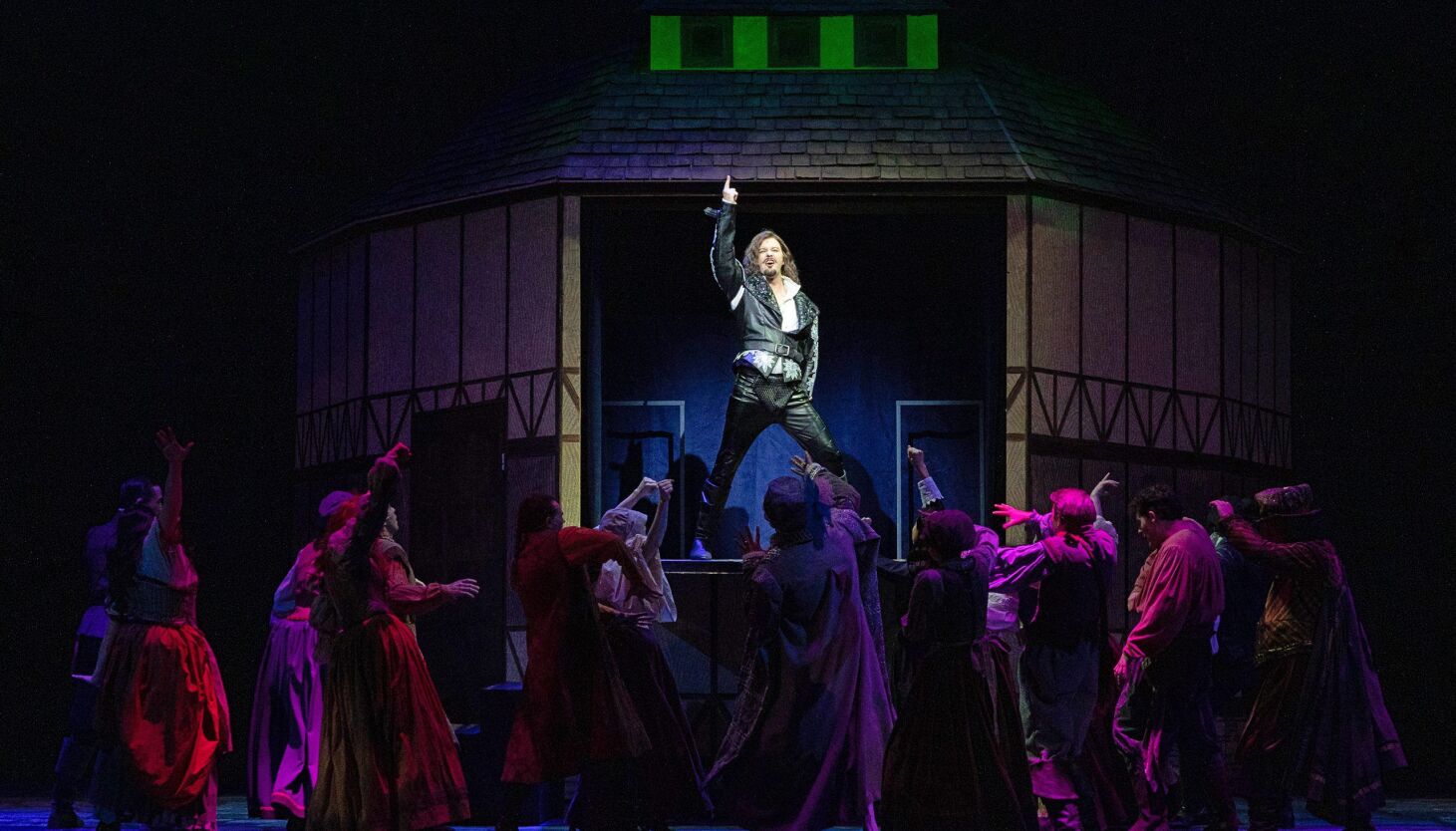 After a two-year delay, Pioneer Theatre Company opened the musical Broadway hit “Something Rotten!” Friday evening. When the coronavirus pandemic delayed the 2020 production, members of the already cast show, like many of us, had to put their lives on hold and hope to get back to the things they love.

“There have been battalions of sorrow, difficulties and challenges in the past couple years. Throughout all of them I have looked forward to bringing this valentine to musical theater onto our stage,” said “Something Rotten!” director Karen Azenberg.

As a lesser-known production, “Something Rotten!” really is a valentine to the phenomenon that is musical theater. The plot revolves around the London Renaissance, where William Shakespeare really is at the top of his game, producing hit after hit to the chagrin of the head of his former theater troupe director Nick Bottom.

Bottom sees Shakespeare as a hack, with less talent than himself and his writer brother, Nigel. In sheer frustration, Nick visits a soothsayer to see into the future and learn what the biggest thing in theater will be. It turns out to be the strange concept of singing and dancing during a play! Although it is the “Stupidest thing that (Nick) has ever heard,” he decides to put on the first musical ever. This is to everyone else’s utter confusion, including his long-suffering wife, theater company, the heavily-pressured Shakespeare, and all of London. The show unfolds on stage in an uproarious musical and Shakespearean fun, as Nick’s life unravels in his own frustrations.

Pioneer Theatre Company’s production of “Something Rotten!” was anything but rotten. It was a fun, vibrant celebration of the stage. I was impressed from the start with the colorful costumes, energetic dance and ensemble cast performance. The witty script is fast-paced, full of humor and historical references (and innuendo) that get the audience laughing right away. The sets are designed with a playful cross between realistic and illustrated look that are reminiscent of the pop-up books of childhood. And while there were some technical difficulties throughout the show regarding sound and lighting, it was all forgivable as it was opening night.

One of my favorite parts about seeing shows at PTC is knowing that the lead players and the company are both going to perform well. The ensemble cast proved that on Friday with crisp choreography, thorough and nondistracting background interactions , and understandable singing and dialogue for even the unmicrophoned. You could just see everyone was having fun on stage, particularly in the big musical numbers.

Some standout performances of the cast would be the Bottom brothers themselves, Nick Bottom, played by Matt Farcher, and Nigel Bottom, played by Daniel Plimpton. They played well off of each other with that brotherly camaraderie the role required and just enough sibling frustration to be realistic. Nick’s long-suffering wife, Bea, is played by Galyana Castillo, whose comedic prowess and impressive pipes were an audience-pleaser. Nostradamus (not THAT Nostradamus) was played by Robert Anthony Jones, who comedically kept in his role even when an ad-lib was needed. And Howard Kaye’s passionate monologue about his character Shylock’s love of the theater was my favorite part of the play.

Shylock’s love for theater is humorous, genuine, and contagious, as he spoke the lines, “But what I really love — is the theater. … I love the sights, the smells, the roar of the crowd, the splat of the fruit as it hits the actors. It’s a temple to me, I tell you. A temple! Catholic, Protestant, Jew — I don’t give a rats tuchus. My religion — is theater.”

“Something Rotten!” was one of my first experiences back in the theater as the pandemic has started to wane for vaccinated people like myself. I have always loved theater, but when it was taken away at the height of the coronavirus pandemic, I really started to appreciate it differently. It felt great to laugh and applaud with a crowd of people around me again.

There is something so visceral and palpable about live performance. This isn’t a recorded, edited and otherwise crafted film in front of you. There are real people all around you who put in tremendous effort, from the person who scans your ticket to the performer on the stage, the conductor in the orchestra pit and the stage technician who strikes the set. It is alive like no other form of entertainment.

And seeing PTC’s “Something Rotten!” celebrate that experience so much, and so well, was an absolute joy.

“Something Rotten!” runs through March 12, with evening shows Monday through Saturday and a Saturday matinee. Tickets are between $48-77 and are available atPioneerTheatre.org.

Visit Utah Arts and Cultural Coalition’s website NowPlayingUtah.com for a comprehensive list of arts, cultural, educational and social events all over the Beehive State.

KellieAnn Halvorsen is a podcast, news, and sometimes radio producer for DMC. She is an avid learner and semiprofessional nerd whose motto in life is, “Be creative. Be bold. Be inspiring.” Follow her creativity at KAHalvo.com.