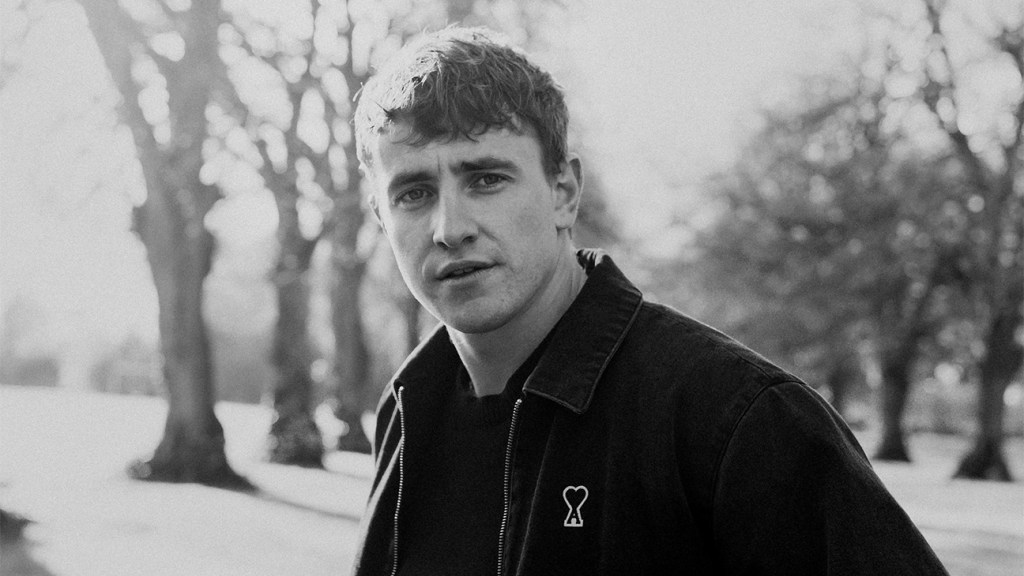 It was actually Paul Mescal’s mother who reminded the Irish actor that April 26 marked a fairly significant anniversary.

“She texted me and was like, ‘Two years ago!’ And I thought, ‘What? What happened two years ago?’ ” he says, speaking with The Hollywood Reporter that day. As the 26-year-old quickly recalled, exactly two years earlier, on April 26, 2020, the limited series Normal People landed on the BBC (and three days later on Hulu) and — for Mescal — everything changed. It’s perhaps understandable that the date slipped his mind given the 24 months he’s had since.

There’s little left to be said about Lenny Abrahamson’s widely adored adaptation of Sally Rooney’s hit novel, a show that, thanks to his phenomenal debut role as the emotionally fraught and lovelorn Connell Waldron, propelled newcomer Mescal into the limelight, and, fueled with the stay-at-home online frenzy of the first COVID-19 lockdown, turned him — and his silver chain — into a viral sensation. British tabloid photographers loitered outside his East London flat, his relationships became the subject of speculation, and several dozen Instagram accounts were set up in his honor (one, famously, just for the chain).

“Here,” it should be noted, is Los Angeles, where Mescal is decamping for a few weeks’ respite. He’s just been for a morning jog, and the dog fidgeting at his feet while we speak is Maxine, the pug owned by his girlfriend, Grammy-nominated singer-songwriter Phoebe Bridgers.

But changes in his personal life aren’t what he’s talking about.

“Here” will soon be Cannes, where he has lead roles in two films that will have their world premieres. As he notes, whatever the aftermath of his breakout in 2020 may or may not have been, “everything I’ve gotten to do since is related to that.”

Although Normal People won Mescal a BAFTA TV award for best leading man (an honor he, rather delightfully, dedicated to his co-star Daisy Edgar-Jones) and landed him an Emmy nomination, he was already well on his way before the accolades started arriving. In the summer of 2020 Maggie Gyllenhaal cast him as a sensitive and observant pool attendant who catches the eyes of both Olivia Colman and Dakota Johnson in her awards season darling and directorial debut, The Lost Daughter, his first feature.

But before that had bowed in Venice last year, he’d filmed Carmen, Benjamin Millipied’s upcoming modern-day interpretation of Bizet’s opera, playing the male lead alongside Melissa Barrera. More recently, he completed Garth Davis’ sci-fi thriller Foe, another lead role, this time alongside fellow countrywoman Saoirse Ronan and produced by prestige tastemakers See-Saw Films (behind The Power of the Dog). It marked his first bigger budget film and one he admits he had “a bit of trepidation” about, particularly a set with 100+ crew. “I’m used to working with 30 or 40, which I probably prefer, because there’s a degree of intimacy”” he says.

And two of these smaller, more intimate films are now taking Mescal to the Cannes Film Festival for the first time.

Aftersun, from Scottish first-time feature director Charlotte Wells and competing in the Critics’ Week sidebar, is a two-hander in which Mescal plays a father on a holiday trip with his daughter (played by 11-year-old newcomer Francesca Corio). It’s a small, low-budget drama — shot in Turkey — that he admits “managed to fly under the radar” until it was revealed to be heading to Cannes. “It’s really exciting to have a film announced and then six weeks later people are seeing it,” he says, adding that he particularly enjoyed the experience of portraying someone several years older than himself. “It’s opened me up to playing more exciting roles, so I’m glad to be aging at a rate of knots!”

Then there’s the Irish psychological drama God’s Creatures, in Directors’ Fortnight and directed by New Yorkers Saela Davis and Anna Rose Holmer, a hugely buzzy project that teams Mescal with Emily Watson and, rubber-stamping his growing indie credentials, marks his first project with A24. “Being associated with a company like that is huge to me,” he says. “Independent cinema is in a scary position, but they’re fighting the good fight.”

God’s Creatures was actually one of the first scripts Mescal received after Normal People. Despite whatever insanity may have been going on outside his door or on social media, the lockdown did mean that he could quietly and calmly plot his next course from his London bedroom without the usual post-break flurry of L.A. tours and meetings with casting directors (he signed with CAA shortly before the show aired). For Mescal, there was no desperate urge to capitalize on his sudden fame by signing up for anything and everything thrown his way.

“My first port of call will always be the writing,” he says. “Do I feel something? Am I moved when I read this? And that has been true of pretty much all the stuff I’ve chosen. If I read scripts that genuinely make me weep the first time, that’s my happy place.”

Mescal’s, albeit still short, career and project choices mirror that of a fellow fast-riding and in-demand star not far from home. Funnily enough, he and Josh O’Connor, who found global fame on TV with The Crown before returning to his indie film roots with Mothering Sunday (which took him to Cannes last year), have been friends since everything erupted after being introduced by their shared agent at CAA, Zach Kaplan.

“He was one of the first people that I met post-Normal People.” says Mescal. “Zach emailed and said, do you know Josh O’Connor, because he’d like to sit down and have a Zoom with you.”

O’Connor’s turn as an angry, troubled farmhand in Francis Lee’s exquisite 2017 feature God’s Own Country was a film, Mescal admits, that ticked all his emotional requirements. “That broke my soul when I saw it in the cinema,” he says. The two spoke online and have been in contact ever since, hanging out in London last summer when they were both in town. “He kind of gives me faith … he’s such a fundamentally good person,” says Mescal.

The two friends are actually now due to star alongside each other, playing lovers in the historical romance The History of Sound from Oliver Hermanus. Perhaps not realizing they were acquainted, the South African director, known for Moffie and recent Sundance hit Living, first asked Mescal to about his potential co-star. “He was like, ‘What do you think of Josh for this part?’ and I was like, ‘Are you joking?’.”

Mescal says that they’re currently trying to find a suitable slot in their diaries for The History of Sound, which he admits won’t be made this year. “But the learning for me is that I’m just dying to make films with people I like and Josh is one of those people that I would work with in a heartbeat.”

O’Connor has been equally praising of his friend, telling THR last year that the therapy scene in Normal People “blew my mind.” He’s also remarked how Mescal managed to stay grounded despite the “overnight” stardom.

For Mescal, the intensity of 2020 feels like it’s “a world away.” While the fan base might still be there, it’s certainly making less of a cacophony. Of the numerous Instagram fan accounts, only one appears still committed to the cause, most having gone silent last year. The solitary active account recently posted several photos of Mescal and his Normal People co-star Daisy Edgar-Jones — who are still very much in touch (she gave him an early screening of her Disney+ feature Fresh — posing with fans at Coachella. Not that he’ll see the pictures, Mescal having quietly deleted his account — he had 1.1 million followers — in early 2021 to shut himself off from the constant noise.

“I think I’ve weathered the storm and am out the other side,” he says. “Social media is gone, which is great. And I’ve had a second where I haven’t been promoting anything. So I kind of got to disappear and essentially do the part of my job that I just adore.” This interview, he notes, is the first he’s given in almost a year.

After almost back to back shoots in 2021 with Carmen, Aftersun and God’s Creatures, he was even able to give himself a few months off at the end of the year to avoid burnout, before heading to Australia for Foe‘s shoot in January. “I was just nervous that if kept going the standard of my work, or what I deemed my standard, would drop,” he says.

In other words, it’s the acting that is most important to Mescal, who, despite his youthfulness and somewhat dramatic arrival in the industry, exudes the calm of someone very much at ease with the whirlwind in which he’s found himself. Not that he doesn’t have goals, pointing to the likes of his recent co-stars Watson and Ronan, an actress who he says has “navigated [her career] so beautifully,” as those whose paths he’d love to follow. “These people essentially earn their living on independent film, and that’s what I want to keep doing,” he says. “If I can just make independent films, I’ll be a very, very happy man.”

For the time being, at least, thanks to upcoming projects like the World War I drama The History of Sound and the recently announced The End of Getting Lost alongside Margaret Qualley, Mescal’s happiness seems assured.

Which isn’t to say he’s taken anything that’s happened since April 2020 for granted, even if he needed a reminder of the anniversary.