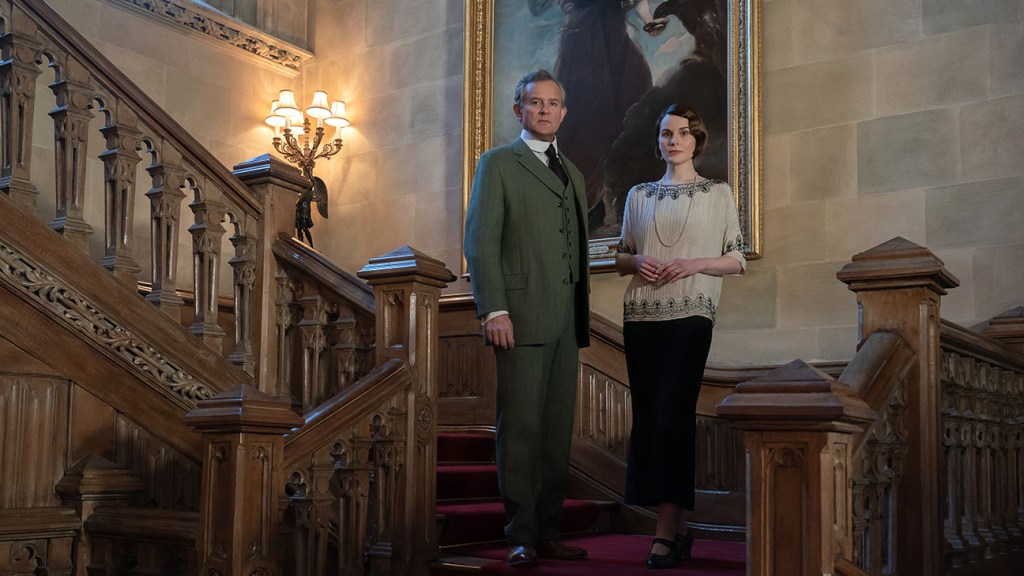 After six seasons on television and one cinematic outing (2019’s Downton Abbey feature, which focused on a royal visit to the estate), the extended Grantham family above and below stairs is now forced to move with the times, as they were in 1928, for the movie’s sequel now in theaters, Downton Abbey: A New Era.

This plays out, in part, through the arrival of a film crew, using the stately home as their set for a silent movie, only to discover mid-production that their movie must incorporate sound to compete with the new popularity of “talkies.” Meanwhile, the Dowager Countess, whose fate was questioned at the end of the last film, inherits a villa on the French Riviera from a mysterious former acquaintance, leading to an emotional trip abroad for some of her family.

In an interview with The Hollywood Reporter, Downton writer and creator Julian Fellowes discussed the context for creating a second movie in the franchise and where the future might take these beloved characters, should there be a further return to film or television.

In the spoiler-free conversation below, Fellowes explains his long-gestating decision behind positioning Michelle Dockery’s Lady Mary front and center as the next matriarch of the house, who will one day take over from Dame Maggie Smith’s formidable Dowager Countess of Grantham. There’s also the intriguing question in the air as to whether the American aristocracy recently explored in HBO’s The Gilded Age (Fellowes’ latest period TV offering) could ever be seen rubbing shoulders with their British contemporaries at Downton Abbey?

Was this story always going to be a film, or did you have any notion that perhaps there could be a return to a longer form TV series or miniseries?

No, this was always going to be a film. It didn’t exist until we knew there was going to be a second film, because that didn’t happen immediately. But the first film was very successful. And so the idea of a second film came up, and then we were just exploring elements that we might get into it. Gareth [Neame, producer] wanted to get at least some of the characters away from their comfort zone, and I wanted to have a real invasion by the 20th century, not just a disagreement or someone coming in with a different opinion, but a real disruption from the 20th century. And Gareth was telling me about his grandfather going through an experience. It was exactly like this in 1928 when he was on a Hitchcock film called Blackmail, a young Hitchcock directing it, and they had to make the same transition. And that seemed to me to be exactly what I was looking for, because it was a completely 20th-century cultural thing invading, but also in a way where the house and Mary could both be organic parts of what was going on. You don’t want something that is not connected to Downton itself, and so those all kind of came up together.

It’s been brewing for some time that Lady Mary will eventually become the new matriarch. Has that always been set in your mind, as while genealogy has something to do with it, did you ever consider any other characters who might steer the ship in the future?

It’s partly what I thought, and it’s also partly Michelle’s performance that we moved on. Mary starts rather quite strong, but rather snobbish and spoiled and difficult and all that sort of thing. And knowing that there’s a sort of pressure on her to get together with Matthew [back in seasons two and three], for all the obvious genealogical reasons and so on. And she’s quite stubborn about all that. But gradually, we see her mature and turn into someone who is aware of her responsibilities and in this film, what I hope people see, is that she is going to be able to make the adjustments as the 20th century gather steam in a way that her father would have difficulty with. When she’s taking on a job in the film, and is addressed as Lady Mary, she says “it’s Mary, please.” And that’s a very 20th century thing to do. Robert would not say, “Robert, please.” No!

She’s also able to have a friendship with the producer, well a romantic friendship, really, amitié amoureuse as the French say, with someone who is quite an ordinary, working, middle class man who’s come into the house for his own purposes. And she doesn’t have that social gap that some people did have, do have. I know people now who find it very difficult to make friends outside their own social grouping. You can find them at any level of society. There are some people who are over-challenged by being with people who are conditioned differently than them, and when you’re going into a position like the one Mary will have, which is essentially running the estate until George is old enough to at least share the work, that’s a luxury she can’t afford. She’s got to be able to get on with everyone and work together with everyone. And you see it happening in the film. So in that way, yes, we are pursuing that development. And if we did go on further — and only the gods know whether we will — then we would take that even further.

When you’re writing anything to do with Downton, have you always got that Maggie Smith zinger in your head that you’re keen to get to?

Part of the zinger is the line that I write. But a great deal of it is the way that she says it. One always has to remember that. The great thing about writing for really good actors is they make your script sound much better than it was when you wrote it. Always!

What was Maggie’s reaction to the continuing story of Downton Abbey: A New Era when you first talked to her about it?

I think she was quite positive! She’s always very, very supportive, and I’m always wondering anyway if she has anything to thank us for, because she was an extremely successful actress with every major award before anyone had ever heard of Downton Abbey and all I think we’ve done for her is made it really difficult for her to do her shopping. So, I’m not sure how much of a blessing that is. But she’s been fantastic for us, always.

Have you mapped out what could come next for each character, if there were to be spin-offs or future series years down the line?

Well, my life is much more random than you seem to express there. I never know what’s coming on Tuesday, never mind in 10 years’ time! But I think, inevitably, you think if we are to go on with these people, with this situation, with this house, whatever it is, how would we do it? And there are lots of different choices. There are lots of different directions. The thing about characters is when you’ve gone on with them so long, it’s like annotating a real life because lives go on a long time. And when you meet friends you haven’t seen for two or three years, as we are all doing at the moment because of COVID, your first thing is to ask, “Is your mother still with us? Did your daughter marry that man? What happened with the job? Did the house work out?” There’s all this stuff to catch up on because, really, all you’ve done is the odd telephone call or a Christmas card for two and a half years. So there’s no reason to believe there’s a natural, finite moment with these things. As long as there’s an audience, there’s certainly something to say.

Would you like to do a crossover at all between the Downton and the Gilded Age worlds in some way?

Of course, The Gilded Age is happening 30 years before Downton started, so the only thing you’d be able to see really was for the young Violet (Dame Maggie Smith’s character) — well, no, not that young, actually, because her son would be grown up and her son and daughter-in-law would be getting married in about six years’ time. So I suppose he’d be about 20 and she’d be about 13. But I’m not quite sure what there is to do with that. But we might, I suppose, reasonably enough see Cora’s mother, who was quite a vivid character if you remember. I haven’t made any decision on that, but it’s a different world. The Gilded Age is a far harsher world. The stakes are greater. The people are tougher there. The battles are harder fought. So you don’t just sit there with a bottle of red wine toasting your toes while you get involved with it. They’re stronger and I think interesting in a different way. I think once again, we got very lucky with our cast. I think they’re all absolutely marvelous — Carrie [Coon], and Morgan [Spector], Kristine [Nielson] and Cynthia [Nixon] are all absolutely fantastic, as are the young cast, Louisa [Jacobson] and Denée [Benton] and everybody. I couldn’t be happier, really, with all of them.

Downton Abbey: A New Era is now in theaters.