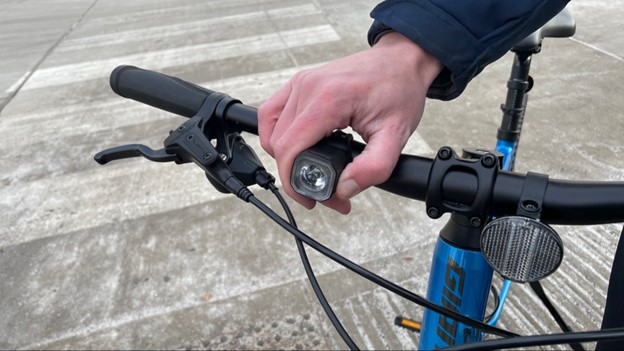 INDIANAPOLIS — An IndyGo professional stage coach operator is fronting a push to protect bicyclists on the road, using money out of his own pocket.

William Hazen says he noticed an uptick in reckless driving during the pandemic. In one instance, the IndyGo operator says he actually witnessed a bicyclist being hit and killed by a speeding driver after they had gotten off the bus.

“I was sort of affected by that,” said Hazen. “You know, the people that are dying… they have families, and it’s somebody’s husband and somebody’s dad that’s not coming home.”

Hazen decided to do something to help bicyclists, especially those that ride in the dark.

He gives out free bike lights.

“For a lot of our riders, that last mile is done on their bicycle.”

Hazen has given out around 50 lights so far.

“I started with just four sets. And it’s sort of grown since then.”

“It’s just about taking care of our neighbors. I mean, you see a problem and you do your best to bring resolution to it, to solve it.”

Some bicyclists say the lights are a game change for their safety.

“I’ve been almost hit a couple of times. So I realized the importance of having lights,” said cyclist Anthony Peters.

When it comes to drivers, Hazen asks you to pay closer attention to those on two wheels.

“Take an extra couple seconds and look out for cyclists. They’re just people trying to get to work and school and anywhere else just like you are. So just take that extra second and make sure you’re being vigilant.”

Anyone who wants to help can donate to “Bike Indianapolis” or “Bike Lane Uprising”. You can also reach out to either of those organizations if you need a bike light.