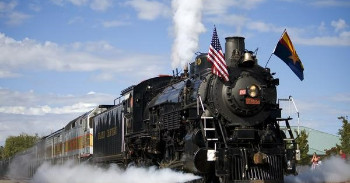 Grand Canyon Railway announced that in 2022 it will run a big steam engine that once traveled Grand Canyon’s South Rim.

The news: Grand Canyon Railway will start to run the big steam engine, called #4960, beginning in 2022.

Details: The engine will begin departing at 9:30 a.m. beginning on the first Saturday from March through October.

Flashback: In 2020, the Grand Canyon railway played host to a real-life Polar Express train, which runs through the Southwestern United States, as I reported for the Deseret News.