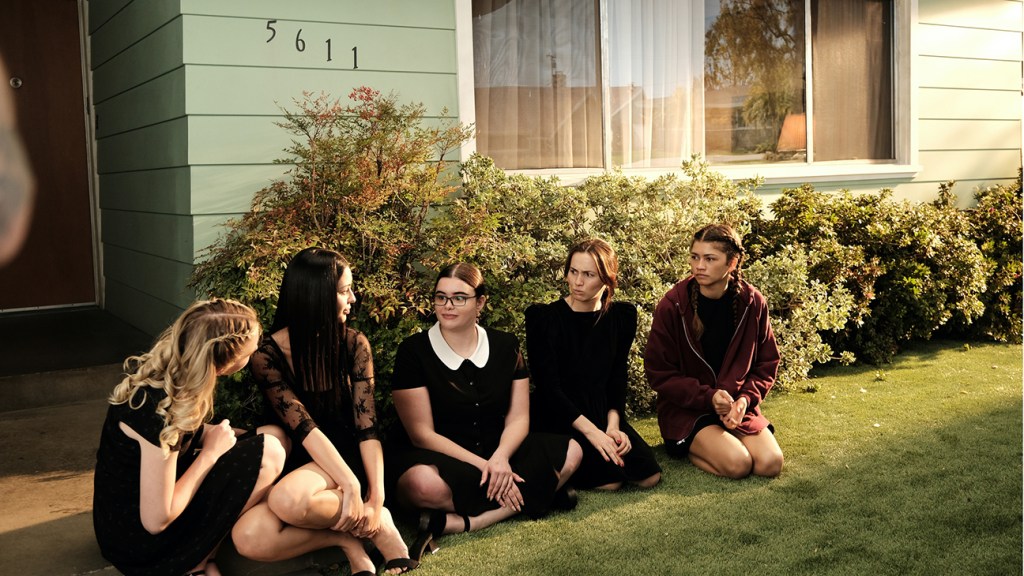 For better or worse, Euphoria is an event. Every Sunday, Sam Levinson’s feverish teen drama draws in millions of viewers ready to submit to the rules of its wonky reality. Plotlines are picked up and quickly abandoned without so much as a second thought, and the music, lighting and narrative structures are less about realistically portraying teenage life than they are about capturing the frenetic moods of adolescence.

The show, which premiered on HBO in 2019, began as a study of protagonist Rue (Zendaya), her drug addiction and her burgeoning relationship with her best friend Jules (Hunter Schafer). There were other storylines — some of which (Barbie Ferreira’s criminally underwritten Kat and her identity crisis, for example) were more interesting than others (anything having to do with Jacob Elordi’s Nate). But Levinson, who writes and directs each episode, has always seemed more interested in usurping narrative conventions, needling his characters’ psyches and dissolving the boundaries between real and unreal.

It’s fitting, then, that the season two finale felt fully subsumed in Levinson’s obsessions, signalling Euphoria’s surrealist future. Episode eight, the title of which (“All My Life, My Heart Has Yearned for a Thing I Cannot Name”) is a quote from André Breton, the 20th century poet and a founder of surrealism, was a heady assemblage of meta-commentary and plot twists that swerved and careened to a confusing, but optimistic finish.

The episode picks up with Fezco (Angus Cloud), who finds himself in a prickly situation with ally-turned-mole Custer (Tyler Chase). In last week’s installment, Custer tried to conscript his girlfriend Faye (Chloe Cherry) in his plan to set up Fez. But although Faye doesn’t betray Fez, the tense exchange now turns fatal, leaving Fez to face the tragic consequences of his actions. With the police outside his door, his future, already uncertain, holds even fewer promises.

Fez hovers over his kitchen sink — his suit bloodied, his body tense — and relives memories leading up to this moment. In the days, weeks, months — it’s not clear, and it also doesn’t matter, really — before, his relationship with Lexi (Maude Apatow) deepened. Levinson uses the first of several time jumps here, transporting viewers to a golden-hued recent past, in which Lexi and Fez spend hours on the phone with each other. Their roving conversations (they fantasize about the future, discuss Little House on the Prairie and weigh the ethics of Lexi’s upcoming play) vibrate with the youthful energy of courtship. The heavy-handed injection of Levinson’s zeitgeist-geared commentary — in this case, the way social media strips relationships of mystery — is ultimately balanced out by composer Labrinth’s smooth and sweeping score.

Elsewhere — both temporally and physically — Lexi is facing the ramifications of her play’s revelatory first act. Her sister Cassie (Sydney Sweeney) barges into the theater after Nate breaks up with her and interrupts the production. Herein marks the beginning of the lovesick blonde’s origin story, and the end of viewers’ certainty as to what’s “real” and what isn’t. Sweeney, who’s delivered a winning performance this season despite the camera’s discomfiting attention to her body, transforms on the (fictional) stage. She embodies Cassie’s rage in a monologue that (yes, you guessed it) doubles as commentary on engaging with life versus merely observing it. “That’s why you’re able to stand up here and judge all of us,” Cassie screeches at Lexi. Their mother (Alanna Ubach) tries to pull her off stage.

But no amount of cajoling or begging can quell Cassie’s volcanic fury. Theatergoers let out audible gasps and jeers. One person wonders aloud if this moment is part of the play. Is it? Euphoria giddily side-steps the question and frolics in the gray area between reality and fantasy. Maddy (Alexa Demie), visibly perturbed by Cassie’s antics and still reeling from a betrayal that was one of the season’s dramatic focal points, jumps on stage and slaps her friend across the face. The thwack sets off more chaos, before the two move their fight out of the theater and into the cotton-candy-pink-tiled bathroom. With those two out of sight, the camera finds Rue, Jules and Elliot (Dominic Fike), whose relationships haven’t been salvaged since Rue’s punishing intervention episode.

Since that ruinous day, Rue has been on an apology tour. The recovering teen has recommitted to sobriety and must now face the people she hurt. She started with her sponsor Ali (Colman Domingo) a few episodes back and, in this episode, via flashback, we see that she confronted Elliot next. But their exchange, which is mostly a full five-minute acoustic performance of a song Elliot wrote about their friendship (written by Zendaya and Labrinth), leaves the status of their relationship unclear.

When Euphoria finally turns its attention to Rue and Jules (the reason I still watch the show), the shift feels breathless and almost secondary to everything else that has occurred during this episode in the present, past and imagined future — on and off the stage. The dizzying adventure of this hour or so of television sees Lexi’s excellent and bloated play serving both as a stand-in for Euphoria as a show and as a way for Rue to process her own experiences. At the peak of Cassie’s rage, Bobbi (Veronica S. Taylor), the show’s real hero, comforts Lexi with lines about how art should be dangerous and, most importantly, not boring.

And she’s right. Perhaps that’s why Euphoria seizes my attention week after week. Along with its devoted fanbase, Levinson’s creation has inspired a coalition of fierce critics (sometimes there’s even crossover), who recycle debates about whether or not the show is “good.” Bobbi’s sentiments suggest the futility of that discourse. Through this fantastical, high-wired high school production, Levinson reasserts his aesthetic and narrative preferences and the show’s curiosities: creatively reflecting the emotional core of its characters. How far will they go to fulfill their needs? How far will Levinson push them?

Euphoria often resorts to messy, experimental and sometimes pompous storytelling to answer these questions. If the finale is any indication of what’s to come, the message for those still on board seems to be: Submit to the fantasy and don’t overthink the ride.