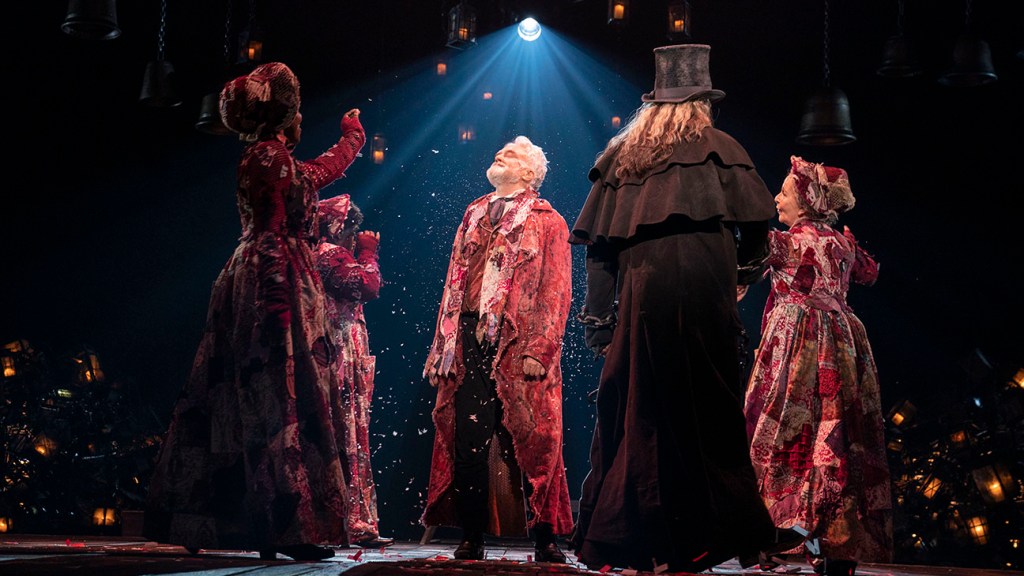 The lights are back on at the Ahmanson Theatre.

The Center Theatre Group venue raised the curtain Wednesday for the opening night of A Christmas Carol, the first production to grace the stage in nearly two years due to the COVID-19 pandemic. And what a festive night it was. The mammoth Christmas tree on the terrace was laced with white lights and featured a burst of blue on top, theater attendants lined up to check vaccine cards in plush holiday hats and reindeer ears, and the hot chocolate was being warmed up for a post-show reception.

As guests made their way inside for 8 p.m. showtime, they were greeted by white envelopes on each seat. The card inside read, “We’ve missed you. Tonight’s performance is dedicated to you: The first to return. The Ahmanson has been dark now for 628 days. We imagine you’ve missed this as much as we have. As we gather tonight, surrounded by fellow theatre lovers, let the magic of this moment remind us that there is nothing like live theatre.”

Thomas Caruso isn’t one who needed a reminder. He directs the production and told The Hollywood Reporter on the red carpet prior to showtime how grateful he was to be back in his most cherished place. “I’m just so excited,” he said. “It’s been 18 long months. To be back at CTG after that long period, with this beautiful show, which is all about hope, rebirth and starting over, it couldn’t be more on theme with what we’re all going through right now.”

“Bradley is the perfect Scrooge,” Caruso continued. “He is such a generous actor and human being and is a great collaborator. I had known him from theater work but also from so much of his diverse TV work over the years and to see him embody someone with such darkness and then, at the end, let it go and embrace joy, humor and life, I know so few actors who can have that kind of arc and run the full spectrum of emotions. He does it so effortlessly.”

His wife, Amy Landecker agrees. She told THR on the carpet that she gets emotional thinking about how happy he is embodying Scrooge. “The joy that is running through his body every day because of this part — it makes me weepy thinking about it,” she explained. “It’s so exciting to see him in a live performance and the rest of the cast is insane. It’s a stunning adaptation, very modern. This isn’t your mother’s Christmas Carol. Also, Bradley is just the sexiest Scrooge.”

Landecker also pointed out that the well-known themes of the play align perfectly with Whitford’s personal beliefs about equality, kindness, service and redemption: “This role is everything that my husband believes in in the world in play form.” He had other fans in the audience. Dule Hill, Blair Underwood, Matthew Morrison, Ever Carradine, Jennifer Leigh Warren, Charles Shaughnessy, Kate Linder, Peter Paige and Joe Pacheco attended Wednesday’s opening.

Pacheco told THR that it was special to be back at the Ahmanson after the extended closure but it was also bittersweet in that it marked the last hurrah for Michael Ritchie, who announced that he would be stepping down as artistic director on Dec. 31 after a 17-year tenure. Ritchie was feted during a pre-show dinner in a tented structure on the terrace.

“I met Michael when I was 14,” Pacheco recalled. “We worked at the summer theater, Surflight, and he was the tech director. I also worked with him at Williamstown. He’s one of my closest and oldest friends in the world and he’s also one of the greatest guys in the world. He’s going to be sorely missed, for sure.”

Emotions continued to flow through the show as the opening night performance was greeted by a standing ovation. With some the audience still on their feet, Whitford took a bow at center stage and exclaimed, “We’re back!” He then tipped off the audience to the Center Theatre Group’s charity partnership for the show’s run, South L.A. Café. The nonprofit partner, led by Joe Ward-Wallace and Celia Ward-Wallace, seeks to fight racial, social, economic and food inequity through coffee, community and connection.

Then Whitford admitted that the company “struggled” with how to address the massive loss of Stephen Sondheim as the theater great passed away Nov. 26 at age 91. It hit close to home for Whitford, a vet of the stage who had the honor of playing Sondheim in Lin-Manuel Miranda’s directorial debut tick…tick…BOOM! which was just released. “It’s weird to open a show without acknowledging the loss of Stephen Sondheim,” Whitford noted. “This may be the least Stephen Sondheim show that you have ever seen but I can tell you this, that mind blew open the doors of not only American musical theater but all of theater.”

As a way to honor Sondheim’s legacy, Whitford then led his cast in a touching, if not unique tribute. “We are about to honor the greatest Jewish composer and lyricist of the American theater with a wordless, English bell carol. This is for Stephen.”

A Christmas Carol is now playing through Jan. 1.